In the UK, it’s currently mild – very mild. Provisional data through the 9th shows the mean Central England Temperature (CET) is running at 7.5°C, which is 3.9°C above the 1961-1990 average. The large-scale pattern during the month so far (Fig. 1) has been characterised by a ridge extending from the Azores to Europe, and low pressure near Greenland – creating a strong flow of mild, subtropical Atlantic air (the “tropical maritime” airmass). This is the positive phase of the ubiquitous North Atlantic Oscillation (NAO), which describes the primary mode of large-scale variability in the North Atlantic-European region. The NAO has been in a positive state since 28 December 2019, likely influenced by the strong stratospheric polar vortex.

Mean temperatures at the University of Reading have been well above the 1981-2010 average for every day of the month so far, with the 9th January a staggering 6.1°C above normal at 10.8°C!

As this was before the colder, snowier period of 2009-2013 (and I had yet to live through a particularly snowy winter despite being in North Yorkshire), I remember thinking that the unusual warmth must have been due to climate change (it followed hot on the heels – pun intended – of many UK heat records in 2006). Certainly, January 2007 was a hot one for most of the globe.  It was the first month in NASA’s analysis to be more than 1.0°C above the 1951-1980 average (Fig. 2), something which we only saw again in October 2015 (and which has since become “normal” with 16 subsequent months breaching that threshold). 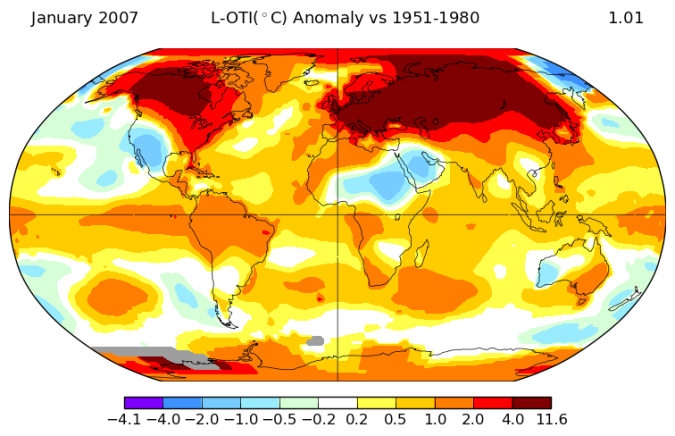 You can see from the 500 hPa geopotential height anomalies for January 2007 (Fig. 3) that it was not particularly reminiscent of January 2020 thus far, with a much less zonal Atlantic. January 2007 did not have an extremely positive NAO – in fact, it turned negative from the 20th of the month, and it was relatively cold for a few days in the final third of the month. Without this colder spell, it would have almost certainly taken the crown off 1916 for the UK’s warmest.

It’s clear, therefore, just how much small circulation changes or persistence can have on these monthly-level anomalies in the heart of the winter and on the receiving end of volatile Atlantic dynamics – introducing a lot of noise into the climate signal for the month. Generating extremes always needs a “perfect storm” – in this case, a persistent, unchanging pattern bringing warm air for as much of the month as possible, superimposed on background global warmth.

Nevertheless, January has warmed in the UK (Fig. 4), though this is perhaps most noticeable in the absence of cold rather than the presence of warmth – likely in part particularly due to warming seas, but also the rapidly warming Arctic meaning cold air outbreaks are warmer than they once were.

January 2020 may go on to be a record breaker. Equivalently, it may not, thanks to the sensitivity of the UK’s temperatures to fine changes in circulation patterns. But thanks to global warming, it’s increasingly likely that 1916 won’t hold the record for much longer if the right weather patterns do occur. On that note, Charlton-Perez et al. (2018) found a slight increase in persistence of the positive NAO regime under strong stratospheric vortex conditions. With the forecasts suggesting a strong stratospheric vortex for the remainder of the month, we might just be in for a record-breaker.