January 24th, 2009. This was the ‘central date’ (defined as the day on which the 10 hPa 60N zonal-mean zonal wind reverses from westerly to easterly) of a remarkable, record-breaking major Sudden Stratospheric Warming event, and there are several reasons why this event is worth a revisit.

The Jan 2009 event set a large number of significant records in the stratosphere – and it still holds almost all of these to this day, despite strong competition from warming events in 2016 and 2018.

The aspect of the event that I always recall is the monumental (you might say…stratospheric) deceleration of the 10 hPa 60N zonal wind, which you can see in Figure 1. In early January 2009, the stratospheric polar vortex was date-record strong, with westerly zonal-mean winds ~70 m/s. Only a few days later, they were all-time record-weak, with zonal-mean easterlies of ~30 m/s. Only the final stratospheric warming (FSW) event of March 2016 comes close to rivalling 2009’s easterlies – the event is in the clear in terms of SSWs that are ‘major mid-winter warmings’. The mean deceleration rate between the peak (Jan 8th) and trough (Jan 28th) was an astonishing 10 m/s/day! 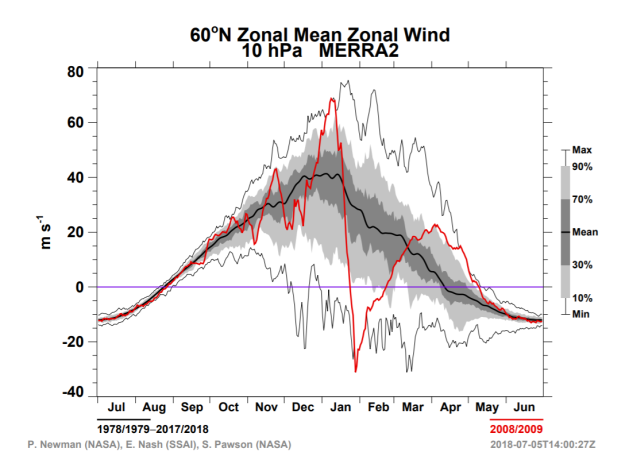 Associated with this rapid deceleration of the vortex was a rapid warming. This is the most wonderful example of why we call them “sudden warmings”. On January 12th, the mean 60-90N (polar-cap) 10 hPa temperature was 202K. On January 23rd, it was 253K – a rise of 51K in 11 days! The peak of 253K remains a satellite-era record for this region of the stratosphere, as you can see in Figure 2.

Of course, to produce such a huge warming, you need a massive heat flux (which also indicates huge amounts of wave activity propagating into the stratosphere, through the Eliassen-Palm relation). The 45-75N heat flux at 10 hPa was another metric which hit outrageously high values that have never been matched. The peak of 564 K m/s on Jan 19th is 6.5 times larger than the daily-mean climatology (and 2.5 times larger than the 90th percentile!), which is shown in Figure 3.

This all came together to produce a textbook wave-2 vortex split. Figure 4 shows this fantastic evolution (thanks to Patrick Martineau for the excellent graphics) – you can really see the cold, strong vortex that existed beforehand, and the strong heat flux from the Atlantic sector. I think you could call this “catastrophic vortex failure”. It’s also worth comparing the location of the daughter vortices in this event versus what’s been happening so far in 2019.

This SSW was also a Polar-night Jet Oscillation (PJO) event (Hitchcock et al. 2013), so had the associated impressive appearance on time-pressure plots of polar-cap geopotential height (Figure 5) – with a long-lasting signal in the lower-stratosphere. According to Karpechko et al. (2017)’s Table 1, 100% of the days 8-52 after the central date had a negative 150 hPa NAM (one of only 5 times that has occurred since 1979). I always think Jan 2009 looks like a side-on view of a foot stamping down on the troposphere! You can also see that the event affected the troposphere until late March – over 2 months after the initial warming and a great example of lower-stratospheric persistence.

The downward penetration of the 2009 SSW was tremendous – it remains one of the few SSWs associated with reversing the 60°N zonal-mean zonal wind all the way down to 100 hPa, primarily because of how effectively the vortex was ripped in two throughout depth of the stratosphere (check out the barotropic wave-2 structure in Figure 6).

This moves the discussion nicely onto the downward propagation of the event. It wasn’t as strong as some SSWs – only 69% of the days 8-52 after the event had a negative 1000 hPa NAM index, and therefore ranks nearer the bottom end of Karpechko et al.’s “downward-propagating” SSWs (dSSW) (and that’s not surprising looking at Figure 5). However, it was nevertheless a dSSW, and had various impacts across the N Hemisphere.

Figure 7 shows the British Isles were influenced by easterlies 7-13 days after the SSW – which was the only case of mean easterlies in the 45 days following the event. Using this metric… the 2009 SSW isn’t special at all, although does pass my semi-arbitrary threshold of 5 consecutive easterly days for a true “outbreak”. However, I still do find it incredible that such a huge, hemispheric phenomenon as a major SSW, involving massive planetary waves and propagation from 30-50 km above our heads, can have a detectable response in such a small area as the British Isles. That’s one of those “isn’t the atmosphere amazing?!” moments.

Figure 7: Average 850 hPa zonal winds across the British Isles in the 45 days following the January 2009 SSW, according to JRA-55 reanalysis.

This easterly spell brought with it colder-than-normal temperatures and snow. The Met Office’s monthly summary for Feb 2009 notes that “it was very cold during the first part of the month with snowfalls in many areas. This was the most widespread snowfall as a whole since February 1991”. Figure 8 shows the Met Office surface analysis for 18Z Feb 1st, with a negative NAO pattern and an easterly flow over NW Europe evident.

Finally, the January 2009 SSW will always be special to me on a personal level, as it was the first time I had heard of sudden stratospheric warming and its influence on the tropospheric weather patterns. A schematic posted by the Met Office (Figure 9) in a press release (announcing an increased likelihood of cold weather in the next few weeks), showed wind reversals propagating down from the stratosphere to the troposphere and eventually the surface. This fascinated me, and it started a journey which had led me to where I am now.