On February 23rd, I accepted an offer of a SCENARIO-funded PhD studentship in the Department of Meteorology at the University of Reading for the project “How can the stratosphere help us predict the weather several weeks ahead?“. The project is supervised by Andrew Charlton-Perez and Steve Woolnough at Reading and Jason Furtado at the University of Oklahoma – giving the exciting opportunity to spend some time working in the School of Meteorology at the National Weather Center and attend conferences in the USA.

It’s a big thing taking on a PhD and I felt it made sense I elaborate somewhat on why I’m interested in the stratosphere. I’ve been talking about the stratosphere a lot recently thanks to the first major Sudden Stratospheric Warming (SSW) in 5 years. I found myself presenting about the SSW in the Department’s weekly ‘Weather and Climate Discussion‘ in the presence of several Year 10 work experience students – hopefully attempting to inspire future stratosphere researchers as I myself embark on that journey! The timing of my PhD offer couldn’t have been better – what’s better than having an interview for a stratosphere-related PhD whilst there’s a big fat ridge sat over the Pole at 10 hPa?

Boundary Layer meteorologists have it easy explaining their interest: “it’s where we live!”. Tornado researchers simply find awe in the atmosphere’s most destructive phenomenon that you can go out and watch. But the stratosphere? It’s not even the ‘sphere’ where weather in the traditional sense occurs! So how did I get ‘into’ it?

January 2009 saw one of the strongest SSWs on record – a wave-2 vortex split event that reversed the 10 hPa 60°N zonal mean zonal wind from record-strong westerly to record-strong easterly. The Met Office announced the SSW and explained how this meant we were going to see cold conditions with a risk of snow. As a 13 year-old I hadn’t seen much in the way of snow (yet…) so this was very exciting! I was fascinated by this phenomenon and it immediately made me realise the atmosphere was far more complex and beautiful than I’d first thought (and I was already in love with it).

The Met Office news release was accompanied with this diagram: 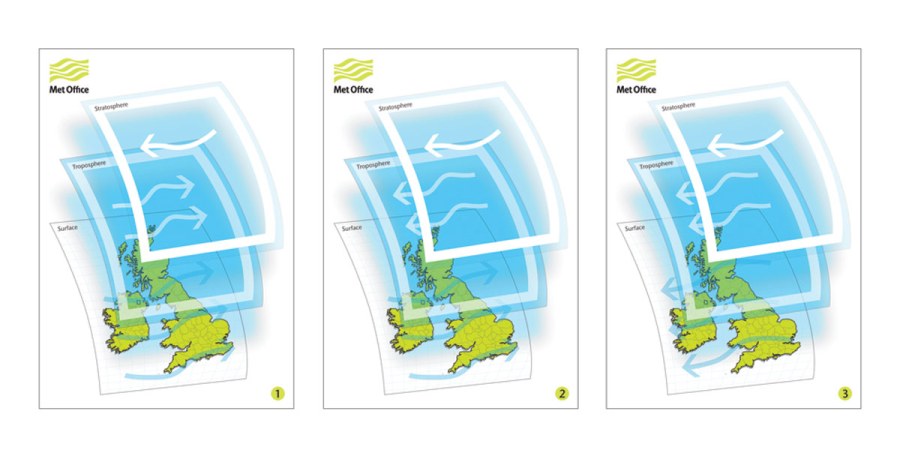 I remember being captivated by this and had a thirst for a better understanding. I began asking questions: How does this happen? How do the stratosphere and troposphere interact? How does this lead to cold outbreaks in the UK? Why does this give increased predictability?

As time went on, I continued to find the stratosphere fascinating – the almost intangible nature of its dynamics – vertically propagating planetary waves, the Polar Vortex, the Polar Night Jet Stream, the Brewer-Dobson circulation…perhaps it was something to do with this being a less well-understood subject, and certainly one so complex it wasn’t often in the public eye. I had always been fascinated by the large-scale motions of the atmosphere – and it seemed in the stratosphere, I’d found the largest scale of all.

In the first year of my undergraduate Meteorology degree I attended an RMetS meeting entitled “Stratosphere-troposphere coupling in the Earth System: where next?“. Much of it went way over my head, but it didn’t put me off and made me want to know more! In second year, I gave a presentation on the unique 2015-16 Polar Vortex, whilst in third year I took a ‘Weather Briefings’ class with Steven Cavallo and always found myself talking about the Polar Vortex! At any opportunity, I’d talk about the stratosphere.

And with all of the meteorology sub-disciplines, most of which interest me on some level, the stratosphere was the one that stuck. I couldn’t be more happy to be researching it further, and helping to improve subseasonal forecasting. It’s a dream come true – especially since I’ll be able to return to Oklahoma, too!

I summed up my interest to the work experience students as:

“Isn’t it incredible that something so entirely abstract that happens 50 km above your head can directly influence the temperature of the wind blowing in your face?”